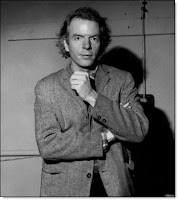 While enrolled in Mark Kneece's Comic Book Scripting class this past winter, I wrote the story seen below, which is entitled Resubmission. I was a 19-year-old, idealistic Long Island kid when the events of 9/11 changed the city forever. Prior to that, I had spent a year at Boston's Emerson College, Gray's alma mater, and also distinctly remember following the 2003-2004 news articles that reported his disappearance, and eventual discovery of his death. Years later, I created the character of Scott Black, and via fiction, decided to change the fate of an individual with whom I'd felt connected. I'd like to thank the estate of Spalding Gray, as well as writer John Boland for posting this script on Spalding Gray's official website.

*The following is an element of fan fiction. It is a means of reflection, and an expression gratitude, and should be perceived as entertainment only.*

Shot of the silhouette of a man, Scott, seated at a table against a gray, unlit background. He is hunched over, with a burning cigarette in his hand, gesturing while speaking.

Scott: It was an old city with its ghosts and crevices, yet a new city, reduced to fear and nothing.

A stage technician is sitting in a lighting booth at the back of the house, looking over a lighting board. He is in the foreground, and we can see the vague figure of the smoking man on the stage in the background. An audience, filling up a small theater separates them. The technician flicks on a stage spotlight.

Scott: I saw the buildings fall; the dust cloud the air, drying tears if only for a moment. I wanted to know why they had struck the heart…

We now see the clear figure of the smoking man seated on the stage. It’s evident that he is in the middle of a performance. He is in his mid-fifties, and dressed modestly. His expression and demeanor are anything but happy. His cigarette has just about burned down to its filter.

Scott: …why they had taken the essence of our lives; stolen our city from us. Maybe history took it back as an overdue payment.

A man, Jim, a stockbroker type, who is younger than the one on stage, is seated in the packed audience. He is staring intently in front of him, mouth agape, obviously taken by what he is hearing. Some of the other audience members have similar expressions, others don’t seem to care, and a few are sleeping.

Scott (from stage): It hurt to see her so victimized by outsiders.

Close up of Scott’s cigarette ash, as it falls into the ashtray.

Scott: And now, every time the subway doors close behind me; every time I buy the Times; every time I open my eyes, really, I stare into a chasm that not even a spectacle of lights can fill.

The curtain falls. The audience claps.

A hallway leading to the backstage of the theater. It is filled with people who are holding coffee cups and martini glasses, wearing VIP badges, and chatting. The air is stuffy with pretension. The focus is on Jim, the man from the audience as he walks swiftly through the hall.

Another VIP: Blah, when I was in Rome, blah, blah.

Closer shot of Jim looking at the different people in the hallway. It is obvious that he is looking for someone. His gaze is intense, and he is clutching his program.

Shot of Jim from a different angle, looking at different pretentious people. He still hasn’t found who he’s looking for.

Jim has stopped towards the end of the hallway, where he has found who he was looking for. It is Scott, the performer of the evening. We see a bird’s eye view of Jim’s foot in the immediate foreground, and are looking up at Scott, who is holding a martini glass, holding casual conversation with a man in glasses. Scott and the man with glasses are blurred by shadow.

Closer shot of Scott and the man with glasses. Scott has stepped forward, and is now half in, half out of the shadows. He looks tired and cynical.

Scott: And who are you?

All three men are now in the shot. Jim is stepping towards Scott, who is directing his position to the man in the glasses, who is stationary.

Jim: Just a…just a guy who saw your show.

Scott: Please excuse me for a moment.

Jim’s expression is somber, yet it is only in reflection. Scott looks innately miserable, and is shaking his head.

Jim: Your speech on 9-11 really hit me. I was on Wall Street when it happened. I saw a lot of people die.

Closer shot of Jim’s face and hands. He now has that youthful, idealistic expression on his face that makes you want to vomit.

Jim: But it brought us together. It made us stronger. I swear, even the cabbies were nicer.

Scott (off panel): Did it though? New Yorkers are a miserable lot.

Scott is pulling a cigarette out of a pack.

Scott lights his cigarette. Jim is positioned slightly behind him, in the shadows.

Scott: What did Shakespeare say about life? It’s a walking shadow. A poor player. A tale told by an idiot.

Jim: Signifying nothing. Yeah, yeah, I don’t buy that.

Wider shot of the two men. They are now surrounded by both men and women who are wearing VIP badges, and carrying coffee cups and martini glasses. The new people seem to want Scott’s attention.

Scott: You should. It’s a crapshoot. Most of the time you lose.

Person B: Excuse me, Mr. Black-

Scott: Pardon me. I have to go now.

Jim: Poor guy. He doesn’t realize how wrong he is.

Scott is walking down a dark, empty city street. His hands are in his pockets, shoulders are slumped, head is looking down, and there is a cigarette hanging out of his mouth.

He sees a discarded paper advertisement in the gutter of the street that catches his eye.

Close view of the advertisement. It is for the show that he’d just performed.

Scott is walking, reading the advertisement, not paying attention to the street.

He bumps into a woman, who is walking in the opposite direction.

Scott continues to walk, as he tosses the now crumpled up piece of paper into the street.

Jim is getting into a cab outside of the theater. Most of the show goers have left already, but there are still a few people hanging around outside.

Inside of the cab. The cab driver is foreign, though not a blatant stereotype. His cab driver’s I.D. is visible on the dashboard .

Cab Driver: Where to?

Jim: Have you ever met someone who was just…so sad, but shouldn’t be?

Different angle inside of the cab. Jim’s face is solemn. The cab driver looks irritated.

Jim: Do you know who Scott Black is? He’s a writer. Performer. Sad.

Close shot of the cab driver, who is pretty pissed off, but trying to contain himself. He just wants to drop this guy off, so that he can find someone else to transport.

Cab driver: I do not know this writer. I just want to know where you are going.

Jim leans forward, gesturing towards the square hole in the Plexiglas that separates him from the cab driver.

The cab is driving away from the restaurant. Display signs of the restaurant’s name and menu are visible. There is a doorman outside, and a woman with a fur coat is walking out, arm-in-arm with a man in a suit. Jim is walking inside.

Scott is standing outside of the same restaurant that Jim walked into. The scene description is similar to the previous panel, however there is no couple walking out, and the doorman is positioned differently so as to denote a passage of time. Scott is smoking a cigarette that is almost down to the filter.

Scott stomps out his cigarette at the doorman’s feet, directly in front of the door to the restaurant.

Interior of the restaurant. A maitre d is standing at a podium, and there are diners seated at tables throughout. A small, but classy bar area is just beyond the podium. The lighting is soft, there are paintings on the wall, and Mediterranean plants decorate the establishment. Jim is standing near the bar holding a wine glass, talking to someone. Scott is speaking to the maitre d.

Jim has spotted Scott. He looks pretty excited. Scott doesn’t. The maitre d is stopped in his tracks.

Jim: Mr. Black! Looks like we run in the same circles.

Scott: Scott. It’s Scott. I have to be here. What’s your excuse?

Scott is following the maitre d towards a table.

Scott: I just met you. I don’t know if you’re a prophet, or a Mormon or something, but I have to go. Thank you. Good-bye.

*Panels One-Three all show Scott seated at a table with Upper Eastside art collector types. As each panel progress, he looks more and more discontented.

Woman: Would you believe that the Guggenheim turned down Matthew Barney’s new project?

Scott gets up from the table. The woman who speaks, whispers the dialogue to another woman sitting next to her.

Scott is walking up a winding staircase towards the door to a balcony. The restaurant and its diners diminish in size. Jim is watching as Scott walks upstairs.

Scott is leaning over a balcony, smoking a cigarette.

Scott: Who is this show for anyway?

View of Scott looking over the balcony at the distance to the street.

Scott: Not gonna cater to you bastards anymore.

Scott: IT’S SCOTT! And I’m sick of it! Sick of these people. Sick of this farce. No one REALLY cares. They only want you if it suits their wallets.

The atmosphere is warped by Scott’s lack of balance. Jim is leaning towards the camera, as if to grab Scott. We see a distorted view of Jim from Scott’s perspective.

Jim: What about people like me? I just liked your story.

Jim grabs Scott by the arm, pulling him downward, and away from sudden death.

Jim: Empathy, Scott! You have it for everyone. That’s why it hurts.

Jim: Some people do!

Scott is pulling himself into a seated position. Jim is hunched over, with his hands on his knees, catching his breath.

Jim is leaning down, looking Scott right in the eyes. Scott, who is now seated, leans back on his hands, looking at Jim.


Posted by Stephanie Augello at 12:47 PM

Stephanie Augello
I take photos of bands, and write about them. The bands, not the photos. I try to make as much magic happen as possible. www.stephanieaugello.com